Back in the day, every game console had its system-sellers; games with quality so good, they justified the purchase of a whole system just to play them.  Matrix (review), a member of the Gridrunner franchise, is my top pick for, "First Place," on the Commodore VIC-20.  This is a follow-up blog entry for my Second Place nomination,  System-Sellers: Omega Race (VIC-20).

The VIC-20 had a lot of good games, and its hardware features were well-positioned to be a leader amongst console manufacturers of the day.  Lacking the power of today's Dolby-Digital THX enhanced photo-realistic multimedia powerhouses, it took some exceptional developers that focused hard on game-play to really develop a truly great game.  Jeff Minter is one such programmer.  I had the opportunity to speak with Jeff on October 31, 1996... what a genuinely nice guy!

Inspired by over-the-top visual effects in arcade games developed by Eugene Jarvis and released by Williams Electronics in the early 1980s, as well as taking inspiration from Atari's Centipede, Matrix (aka, "Attack of the Mutant Camels," or AMC for short) is a shooting game featuring exceptional two-dimensional character graphics.  The story of Matrix is the story of Gridrunner and its developer, Jeff Minter, and the company he founded called Llamasoft.

Gridrunner was one of Llamasoft’s earliest games, appearing in 1982 for the VIC-20. The movie “Blade Runner” had just come out and Jeff remembers seeing a poster advertising the film when the name Gridrunner came to mind.  Although it draws its inspiration from the Centipede arcade game, with the concept of a snake-like enemy descending the screen through a series of obstacles, it plays much faster.

Jeff managed to come up with a game design in Gridrunner that was significantly different from Atari’s bug-themed coin-op, to avoid their legal wrath, and which distinguished itself from the other Centipede clones.  The title has been revisited and re-imagined at various points over the years.  As such, in addition to Gridrunner, Matrix incorporates play elements in higher levels from other Llamasoft titles, such as the use of mutant enemy camels (in Zone 4) and the ricochet apparatus from Deflex (in Zone 5).  The release of Gridrunner iOS marks the endpoint of a development arc that has spanned more than 30 years.  Gridrunner iOS is part of Llamasoft's Minotaur Project revisiting classic gaming platforms with modern hardware.

Tip:  Rotate your iOS device to the right for VIC-20 mode, and to the left for C64 mode.

Play mechanic was quite simple in the early days of home gaming, largely because of the memory constraints and processor speed.  Jeff used to be into the idea of introducing new styles of control that hadn't been done before - like controlling multiple shooters at once in Laserzone and Hellgate, or the Llama/force field combination in Metagalactic Llamas: Battle at the Edge of Time.  Jeff believes that he never quite got the Jarvis-style explosions down as well on the VIC-20 as Tom Griner did.  Tom was great at bit-mapped graphics, like in Choplifter, but Jeff thinks he redeemed himself in later games like Atari Jaguar's, "Tempest 2000."  When Jeff finally met Eugene the early 1990s, Eugene said that he admired Jeff's explosions!

Jeff was twenty years old when he got his first VIC-20, although he did get experience on a Commodore machine when he was seventeen.  They had a PET 2001-8 (with the calculator keyboard and the built in tape deck) at school on which he taught himself how to code and wrote his first games.

Jeff is an animal lover and was really intrigued by camelids as a child.  Llamas are a domesticated South American camelid, widely used as a pack animal by Andean cultures since pre-Hispanic times.  Jeff has traveled to Peru twice, just to observe them in their homeland.  So, when it became time for Jeff to pick a name for his new software company, Llamasoft was the perfect choice for him.

His VIC-20 coding started out in the living room; lying on the floor in front of the family television.  (Gridrunner was written there in one week.)  Once Llamasoft started to really make money, he had an extension built onto his parents' house that became his lair.  It had long tables down the walls for computer systems, lots of power outlets on the walls, and a 10-foot-long mural of Llamas in the Andes!  He still has his  original VIC-20, with its PET keyboard and large expansion pack.  He said that he would never throw it out.

Jeff recalls that one of the biggest problems programming the VIC-20 was so little memory.  He felt the only way around that was to just come up with clever designs and code them tight.  Jeff tended to stick to character map graphics in those early days.  He focused more on the sound effects though, and thinks his Laser Zone sound effects were among his best.  He basically just tried to get a good, solid, playable game in the memory provided.

Many Llamasoft games were published in the US by Human Engineered Software (HES) of Brisbane, California.  Jeff first met HES founder, Jay Balakrishnan, at a computer show in London.  On display was Defenda (aka, Andes Attack), which was a pretty poor and buggy game, Jeff recalls.  What made it special is that it was written entirely in machine code and not BASIC, like most everything else on the market at the time.  That aspect caught Jay's eye.  He asked Jeff if he could put it on a ROM and Jeff said yes - although he had no idea how he was going to do it.  Jeff ended up doing a couple of games for HES before things really took off with Gridrunner.

Jeff told me that his HES associates were always honest and fair, which was a relief after getting burned a couple of times before.  HES made Jeff more wealthy than a 21-year-old usually expects, so he has no complaints.  Apart from HES, and being self employed most of his life, he has only really worked for Atari.  At Atari he got to meet and  hang out with some of the people who had designed his VIC-20 and 2600 VCS, as well as the majority of systems he owned up to that point.  "It was every childhood VIC-20 coder's dream come true," he exclaimed.  Jeff felt he was well liked and appreciated by his associates at Atari.

After talking with me for a while about the whole emulator scene and his take on it, he released all of his old software to the public domain.  "All old Llamasoft game images for use on emulators can be freely uploaded on any site anywhere, with my full permission." - Jeff Minter, October 31, 1996

Are you interested in computer history? Join the irregular regulars Earl Evans, David Greelish, and Carrington Vanston, plus surprise guests, in the show where everything old is news again. Gather 'round a virtual table where today's talk is about yesterday's computers. Get the skinny from the world of vintage computer hobbyists, collectors, enthusiasts, and old school geeks. They cover modern day vintage tech events, new developments for old hardware, the revival of retro tech, the best of 8 bit culture, and take many strolls down memory lane. Head on over to http://rcrpodcast.com and explore podcasts, review show notes and be informed of upcoming episodes. You'll be glad you did!
Posted by Rick at 7:13 PM 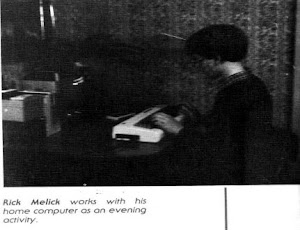